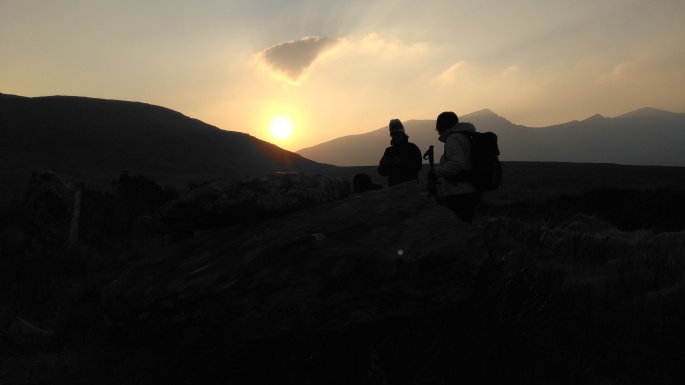 Spring has sprung. At 16.15.21 GMT today, Tuesday March 20,  the Sun passed the celestial equator (the imaginary line in the sky above the equator) and night and day were, on this date, the same length. This is the Vernal or Spring Equinox and it marks the end of Winter or the first day of Spring, depending on how you look at it.

Space.com reckons that if you were standing on the equator at a point just to the west of the Itapará River in northern Brazil, the sun would appear directly overhead. On the Dingle Peninsula the Equinox is marked in a very different way.  Dáithí Ó Connaill of Tralee Mountaineering  Club discovered that the setting Winter sun shines into a megalithic tomb in Loch A’duin (The Lake of the Fort). Loch A’duin is located just below the Conor Pass on the the Dingle Peninsula. Dáithí is the best person to describe it.

The Vernal or Spring Equinox in in Loch A’duin, on the Dingle Peninsula

The following is a brief account of my curious “discovery” regarding the equinoctial sunsets at the megalithic tomb in Loch a’Duin: 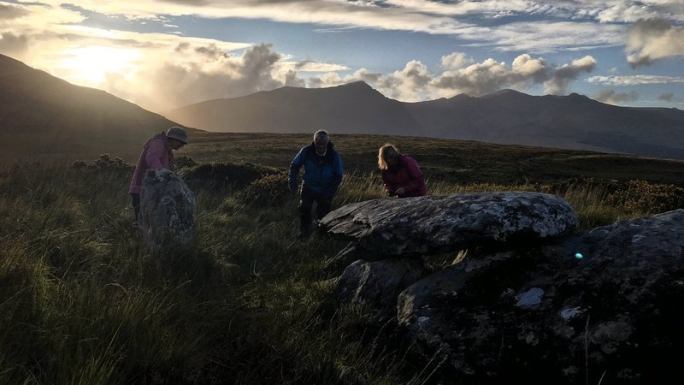 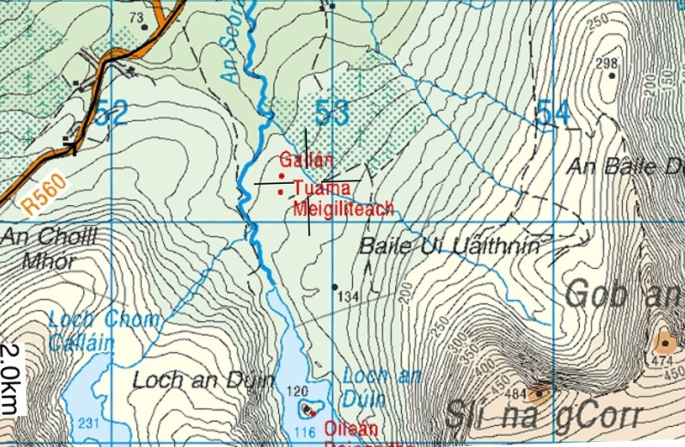 The “discovery” was made following a hunch that the bronze age tomb of approximate date of 2500 B.C., which has a westerly orientation, may have had some significance due to the fact that it is embellished internally with some prehistoric rock art, leading one to surmise that it may have had some ritualistic significance, similar, in a minor way, to the passage tomb of Newgrange in the Boyne Valley, which is oriented on the winter solstice sunrise.

It was visited at the winter solstice annually over fifteen years but, invariably, the sunset was not visible due to either cloud cover or rain.  There was a brilliant sunset on the winter solstice of 2014 but, alas, it did not have any unusual bearing on the tomb’s orientation. 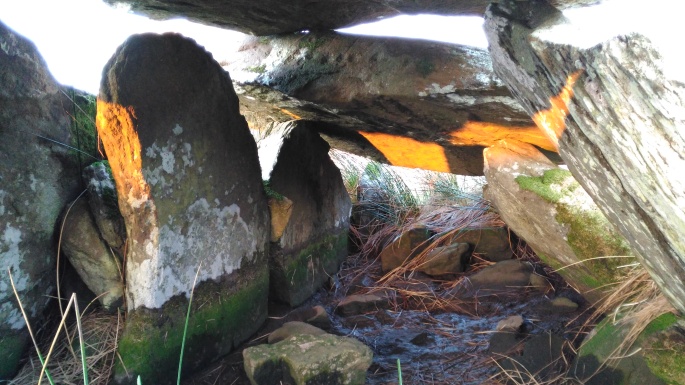 However, this led to a little thinking as to the possibility that it may have had some relevance vis-a-vis the vernal and autumnal equinoctial sunsets around March 21st and September 21st.  The reasoning behind this curiosity was that, when one looks at the orientation of the monument, it seems to face directly into an imaginary “v” formed by the spur of nearby “Sliabh Mhacha Reidh” and the distant spur of “An Gearan”.

It transpired that the equinoctial sunsets of September 2015 and March 2016 were visible and it was delightfully noticed that the sun on both occasions(and indeed over a few days preceding and subsequent to the equinoxes) bisected the “v” and spectacularly illuminated the tomb and the rock-art therein.

There are many theories abroad as to why our distant ancestors went to such careful planning and should lead to interesting discussions. 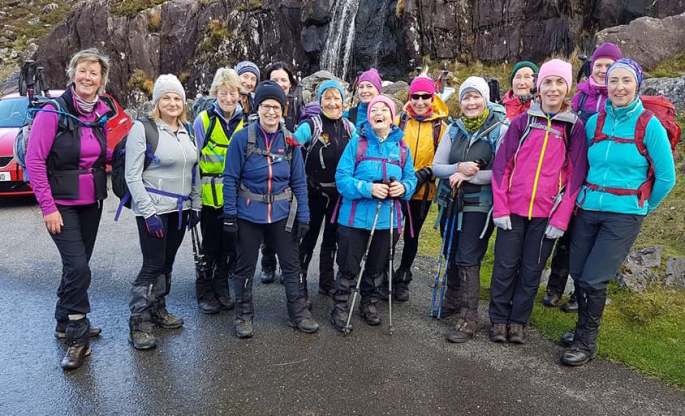 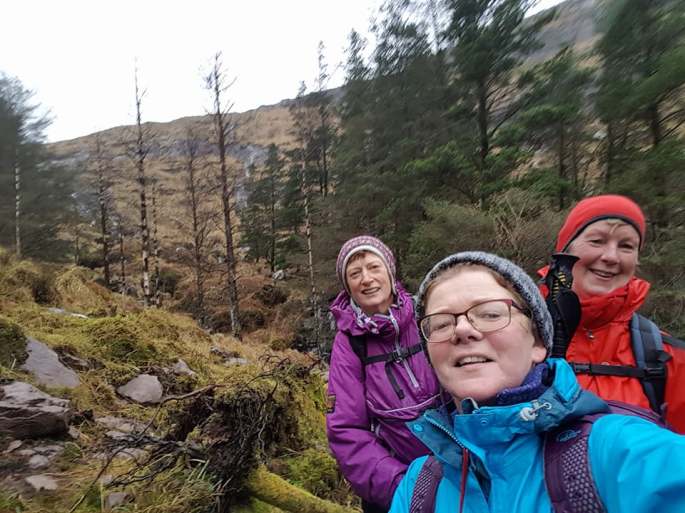 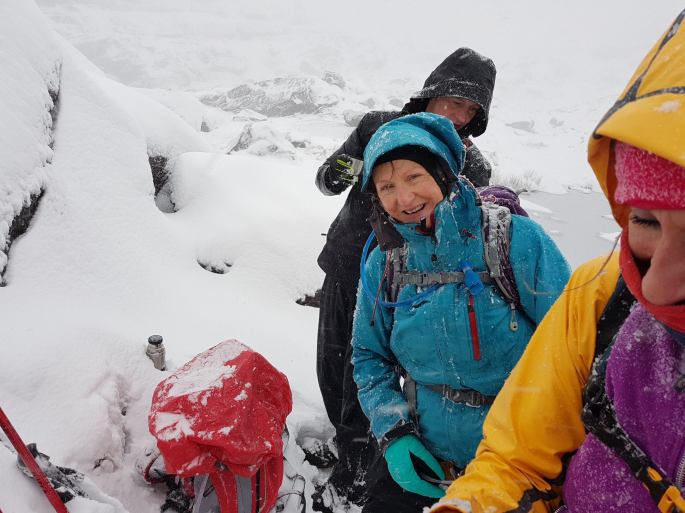 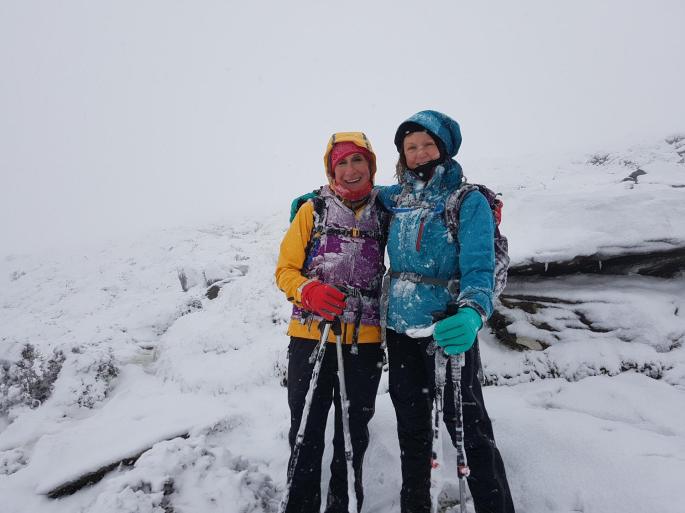 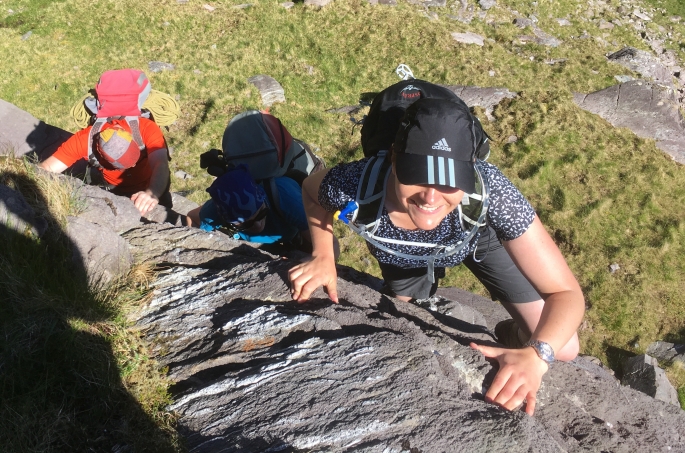 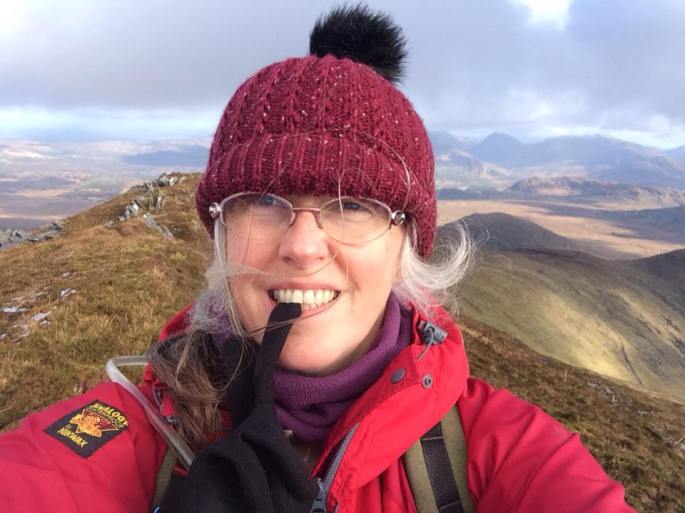 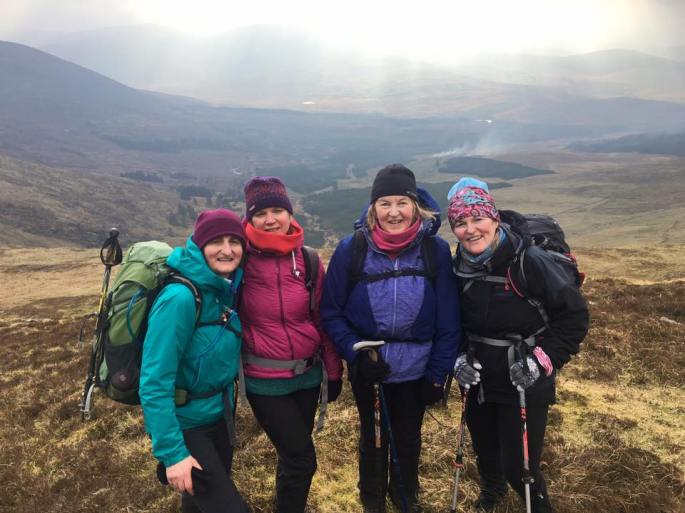 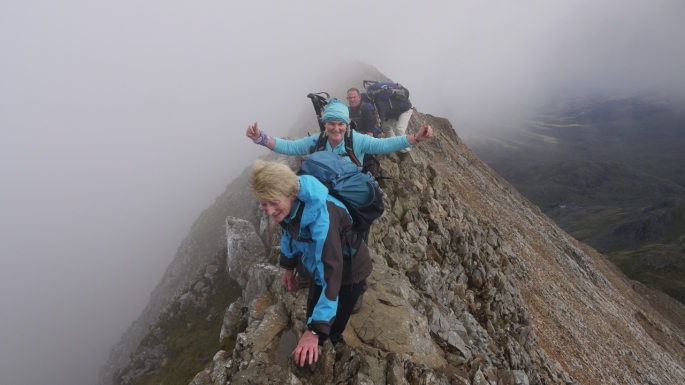 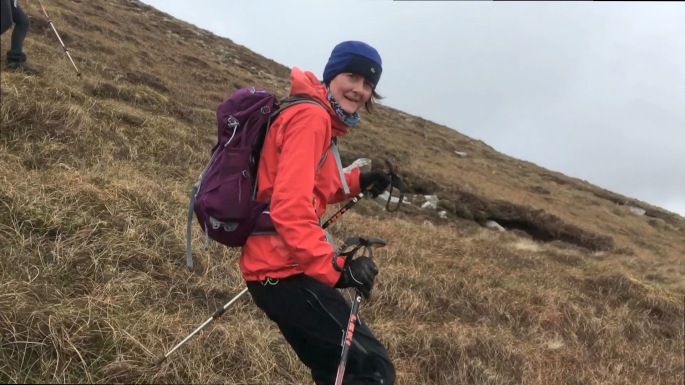 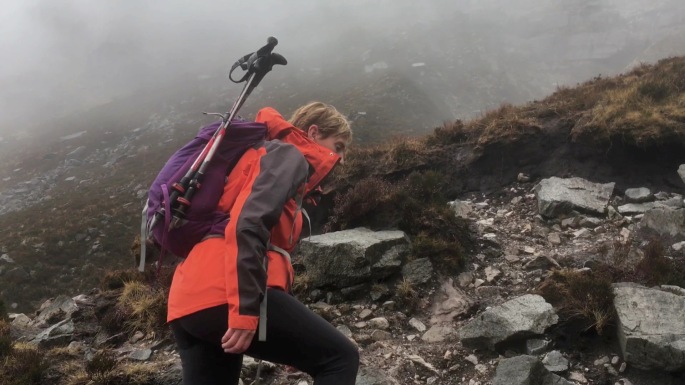 To clear up any confusion about the status of this blog, this a member’s blog. It is determined to be an independent forum for debate about matters relating to our membership of Tralee Mountaineering Club and mountaineering in general. The logo was causing a bit of confusion, people were concerned that the use of a graphic of the logo suggested an official blog.

Point taken. I have substituted a photo of the original badge of the club from which the logo is derived, a small piece of design work that I did for club in the Year of The Mountain, way back in 2002.

The badge was designed by Mick Kellett, and the idea behind it was set out by Tom Finn in a club log book, the inspiration in a way for this blog. Here is a copy of the original log entry. 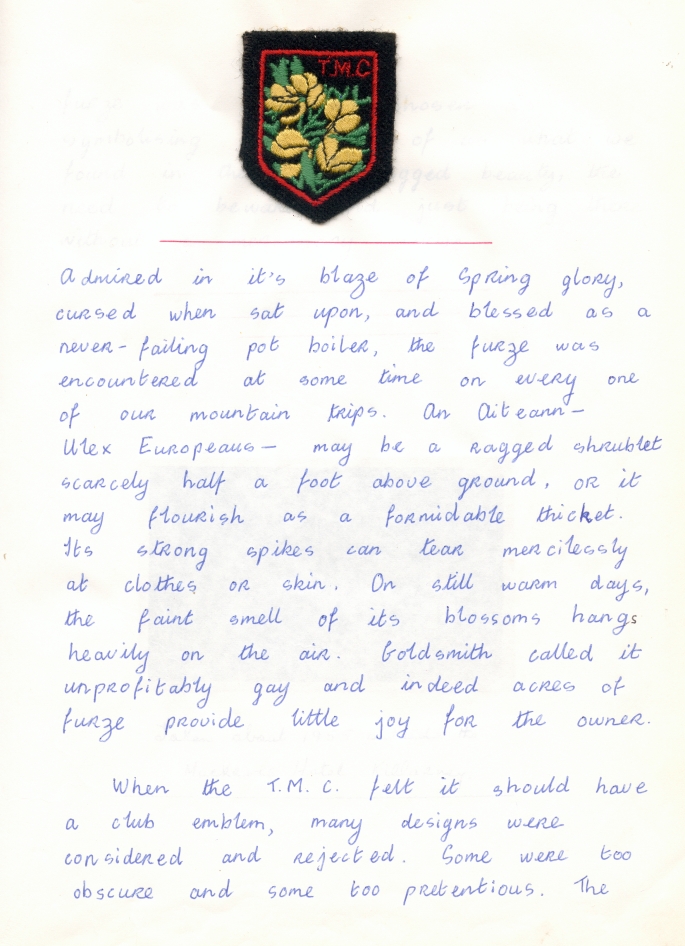 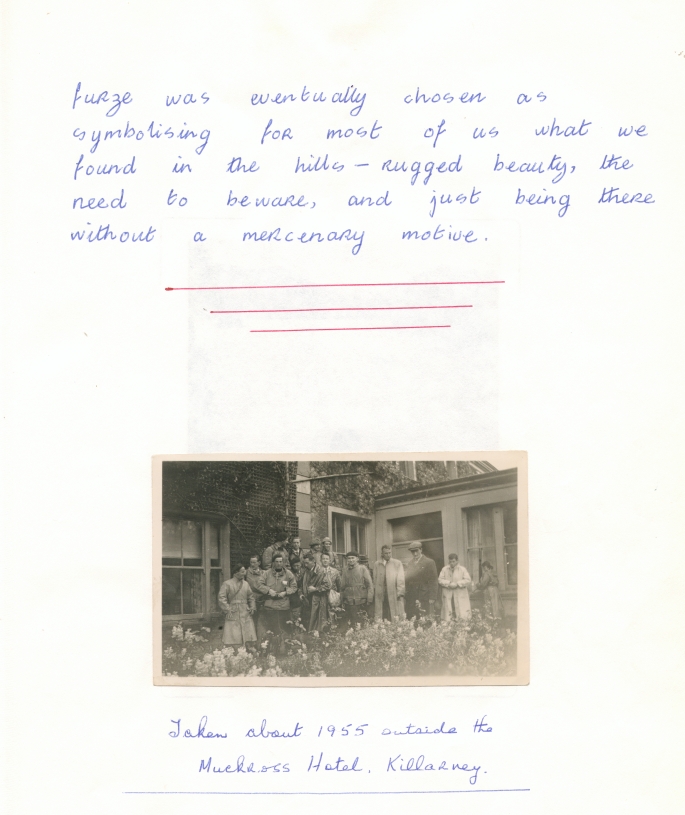 Does training matter? Do challenging days in the mountains enhance members’ experience and contribute to the development of the club? Should the club calendar have all of those elements built into to it?

I come from a tradition within the club that says yes to all of that. In 2014 I led a group of Level 2 Climbers across the Crib Goch in Wales and, with that experience under our boots, we climbed Tryfan on the following day. The Crib Goch is a challenging prospect at the best of times and most of the members involved on the day would never have been considered capable of climbing those routes. Conditions were perfect for a spot of training and everyone completed the routes safely. We repeated the exercise a year later.

Thats how we progress, that’s how the club works for the benefit of all members. All it takes is some leadership, training, a bit of teamwork and, of course, appropriate conditions.  For the past three weeks there has been lots of snow in the mountains, conditions that would have provided many opportunities for similar skills development in the area of winter mountaineering.

To take advantage of those opportunities requires a culture of progression in sport, a commitment to training, and, of course,  leadership.  Leadership has been identified as one of the main challenges facing TMC and mountaineering clubs in general. To meet that challenge we need to look at the skills within the club and the quality of leadership that those skills make possible.

We also need to make an audit of mountains skills appropriate to leadership at each level, including associated skills in first aid and rope work. Any gaps that emerge need to be filled by access to training, either on courses or through participation in club activity that has an inbuilt element of training associated with it – rope days, navigation days, or the application of those skills as a routine part of club walks and taking advantage of the opportunities presented by the current snowy conditions.

We also need to look  at the way the calendar is put together, making sure that walks  are pitched at an appropriate level and ensure that nominated leaders have the necessary skills to ensure an enjoyable, safe, and, where possible, challenging day in the mountains.  Challenging is main word here.

Attendance on club walks is increasing – there were 25 people on a recent level 2 walk –and it may be that the same walk does not fit all members at a given level. We may need to look at a wider range of levels, intermediate levels with varying degrees of challenge for instance.  We would need to train up even more leaders, encourage greater participation in mountain skills training programmes.

That represents a challenge in itself.

One way of getting around that might be the introduction of a Club Leader’s Award, as a first step for members engaging with the various Mountain Skills and Climbing awards schemes. The rewards are obvious.

Next A chance to develop new skills: theAlpine Summer Meet 2018

Three weeks of snow promised unprecedented opportunities for winter mountaineering. The worst of the weather had passed and the way was open for a day spent practicing on snow and ice in Macgillycuddy’s Reeks

This walk was all about the weather, coming shortly after a red snow and ice alert had been  lifted, and before a widespread thaw had set in.

The forecast was a for slight rise in temperature and,  although temperatures would remain low, a thaw would set in, with rain moving in from the West in the afternoon. Winds would remain light. In the Reeks this would mean continued snow cover, though no consolidation, light falls of snow and uncertainty over visibility.

It was a day for ice axes and crampons.

There were four of us. Bertie Hickey, Andrew Kelliher, John Laide, and Ciarán Walsh. Nuala Finn had to pull out due to illness in her family.  We had done a lot of training in snowy conditions over the past three weeks and were looking forward to a challenging and rewarding day in the mountains. 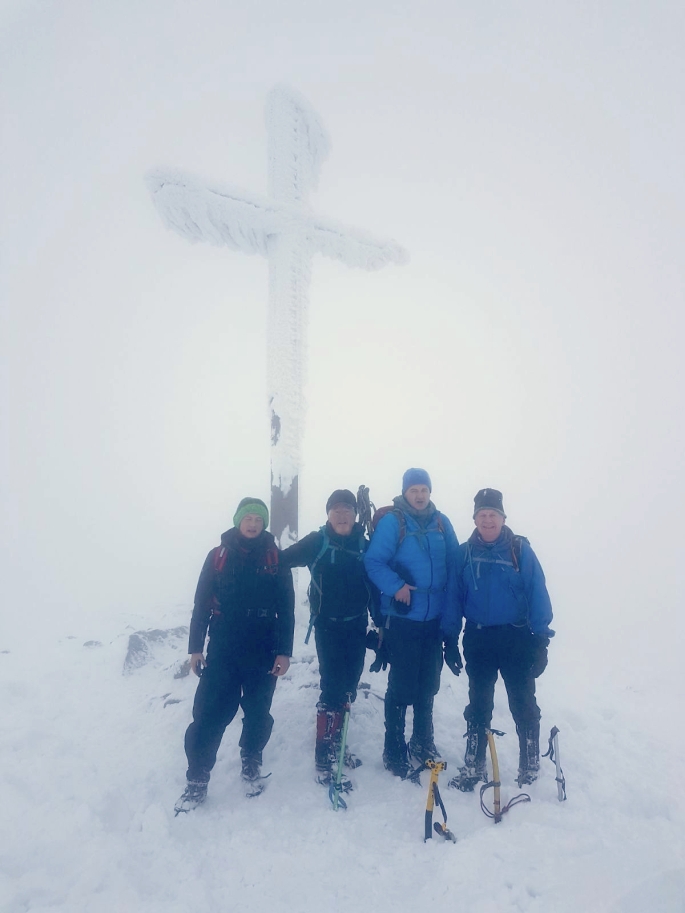 Conditions were perfect. Access roads were clear of snow, except for the final 500m or so up to the carpark in Lisleibane. A number of cars turned around but we reached the carpark without difficulty in  a couple of 4X4s (one was a Honda!).

There was a lot of snow in the Glen. On the last club walk the snow started above Coomeenapeasta Lake. Today, however, there was 3 or 4 inches of snow in Lisleibane, with deeper drifts. It was very mild and there was no wind. As a consequence visibility was very poor and we opted for a straightforward run to the summit

We went straight for O’Shea’s Gully, across the rocky, southern  edge of  Beenkeragh Ridge, and on to the Summit, followed by a straight run (almost) to the Devils Ladder , and down. 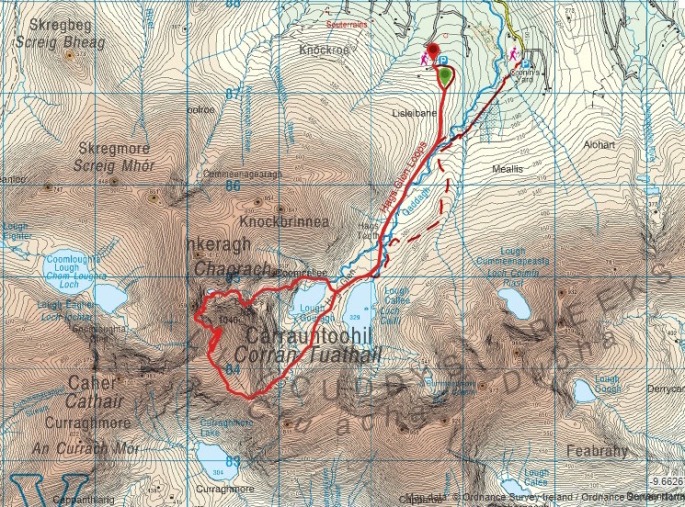 Coimín Íochtarach (1st leve) and Coimín Láir (2nd level) were full of deep snow and visibility was very limited. Dave McBride, Sheila O’Connor, Richard Doody, and Richard Cussen were ahead of us and left a lovely trail of compacted snow. We met three Italian on Level 2, they didn’t have any gear with them and were retreating from O’Shea’s. We geared up at the step below Coimín Uachtarach (3rd level), left the trail and headed up O’Shea’s. 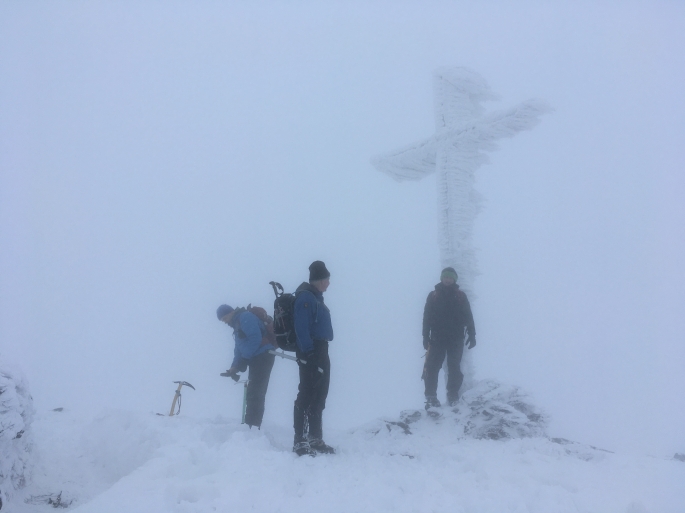 O’Shea’s was full of snow which had formed wide bands of solid windslab.  It was perfect. In some places it felt like a 45° climb, perfect training conditions. A day spent in the Ice Factor in Kinlockleven last October paid off.

Beenkeragh Ridge had deep drifts on the Caher side so we stuck to the rocks. They were covered in hoar ice but going was good. There was some corniching but nothing major. We saw the marks of Dave and Co’s crampons at the top of Curve. They were still ahead of us. There was one other climber on the summit but he returned a short while later with a friend. That was it on the day. 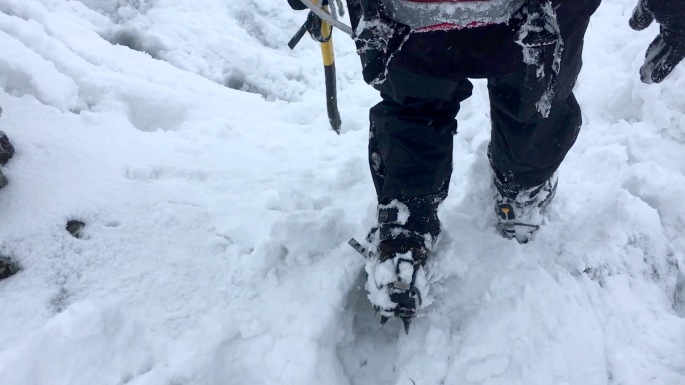 Visibility was vey poor and deep snow covered the trail. We headed down and took a slight detour to the right, corrected and navigated to the Devil’s Ladder. The snow in the Ladder was deep and wet and the ice was thawing, but otherwise descent was straightforward 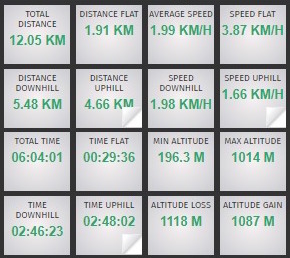 We have had three weeks of snow in the Reeks, with a lot of opportunities for challenging winter mountaineering and training, skills development and progression. The sort of thing we used to go to Scotland for. Magic.

Dedicated to Nuala Finn, the Snow Queen, who couldn’t 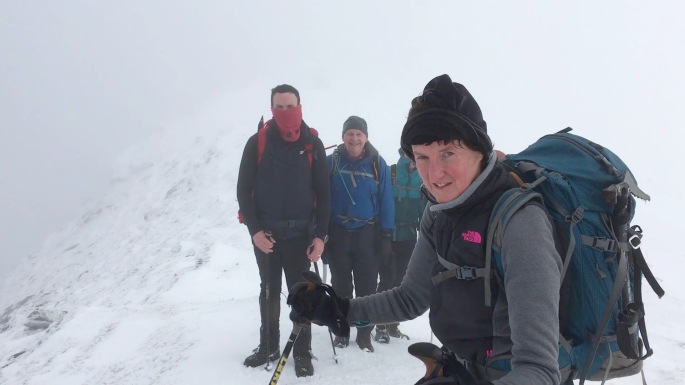