At the Water’s Edge: Two Boats – Around Ireland by Kayak

At the Water’s Edge

is based on a log that Timmy Flavin kept during a 942-mile paddle around the coast of Ireland with Donal Dowd, a kayaker and mountaineer. They left Courtown harbour in Co Wexford on May 11, 1991 and returned just four weeks later, paddling an average of 50 kilometres (31 miles) a day.

Timmy Flavin died of cancer four years ago and his wife Bríd Farrell has published an illustrated book based on his log. It includes tributes from Dowd, other paddlers, and friends. Cathal Cudden and Bernard Forde, well known in the mountaineering community, were involved in the design and publishing of the book.

To Order a copy:

If its not stocked in your local bookshop, email Bríd Farrell at: bridofarrell@icloud.com

All profits from At the Water’s Edge will be shared between the Palliative Care Unit in Kerry University Hospital’s and the RNLI Valentia lifeboat station.

Seán Moriarty in the Killarney Advertiser

Forecast was for settled weather. There was a little rain at the beginning but it remained clear for the rest of the walk. Conditions underfoot were good, especially on the bog between Barnacurrane and the Devil’s Punchbowl.

A panorama taken from a spot height on the ridge south of Barnacurrane. 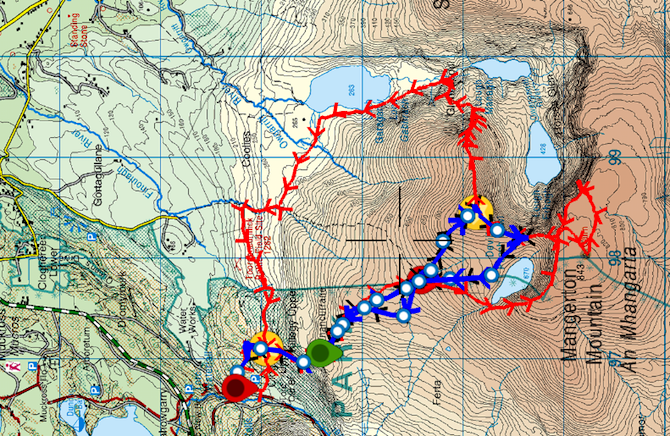 We climbed the final section of forestry to reach Barnacurrane, a gap in a rocky outcrop that marks the boundary between the lowland and the mountain.  The trail is well worn and there is a steep section just below Barnacurrane.  There used to be a stepped path here but that has mostly disappeared and good footwear is essential.

At Barnacurrane one of the group pulled out and Ciarán returned to the carpark with the member before making the return trip to Barnacurrane. His route on the day is marked in blue on the map above.

The red route shows the line taken by the rest of the group. It climbs across the bog, following the line of a wall and the dry ground alongside the stream to reach the track leading to the  Devil’s Punchbowl. From, it follows the track/trail  to the summit (843). From there it crosses the plateau to the aréte descending northwards  to the ridge formed by the Devil’s Punch Bowl and the back wall of Glangappul.

Careful navigation is needed here in poor visibility. Sean O’Suilleabháin warned mountaineers, in his classic guidebook on climbs in the southwest, that Mangerton means the “deceiving one.”

The route continues up to the unnamed summit known as  Mangerton “North,”  heads East on the southern ridge of Glangappul  before descending to the trail that leads into the valley. It follows this trail until it turns northwest from the lake shore, crosses the Owgarrif River –caution – and continues across bog close to the foot of the mountainside until it reaches the track for the Devil’s Punch Bowl.

It follows the Finoulagh River downstream for about 300m and heads west into Tooreencormick, the site of a battle between McCarthy of the Glens (Old Kenmare Rd) and the Normans in 1262, during which Cormac Mac Carthy died. The place name marks his burial on the site of the battle. Keith Woodard, a photographer based in Killarney, gives a really good account of events leading up to the battle.

From Tooreencormick the route continues west, into the forest and back the caprpark.

The Bens were featured in an early guide to Connemara. Rambles in Ireland: A Fortnight in Ireland; 0r, Pen and Pencil Sketches of a Tour in the Autumn of 1846 was compiled by the Gascoigne Sisters, Mary Isabella and Elizabeth (De Burca Rare Books Catalogue No 96, Spring 2011, pages 84-6).

The guide included illustrations from sketches made on the spot. The sisters promised that travellers would ‘be sure to meet with novelty, incident, and adventure,’ although the ‘accommodation at the inns would certainly admit of improvement; but there is excellent salmon to be had everywhere.’

The sisters spent 15 days travelling through Galway, Mayo, Galway, Mayo, Sligo, Donegal, Derry, and Antrim in 1846, in the middle of the Height of the Great Famine. The sisters were very wealthy. Their family were landlords in County Limerick and owned collieries in Yorkshire. The sisters were noted for their charitable work in England and Ireland. Rambles in Ireland was published to raise funding for relief work in Limerick, which was targeted at Protestant orphans.

The Bens were featured again during the An Gorta Beag or the second famine of the 1890s. Robert John Welch, a naturalist and  photographer, climbed the Bens in 1894 and 1895 and recorded the main geomorphological features of the Glencoaghan Horseshoe. He published the photographs in an album that was presented to Arthur “Bloody” Balfour in recognition of his patronage of the Galway to Clifden railway line.

Light railways were built in the west of Ireland to provide employment to the poorest section of the population, who otherwise, would probably have starved to death. Balfour’s brother described it as a political strategy for “killing Home Rule with Kindness.” Maud Gonne, quoting a priest from Mayo, described these relief works as ‘organised famine.’

Dedicated to Nuala Finn, the Snow Queen, who couldn’t

This short video records the ascent of Curved Ridge in the Scottish Highlands by members of TMC on September 28, 2017. It’s a good idea to log all your walks (lowland and mountain) or climbs (rock climbing outdoors and the wall indoors),  especially if you are considering submitting for an award like the Lowland Leader Award or the Mountain Leader Award (better known as the M.L.), the Single Pitch Award (in rock climbing), and the Climbing Wall Award  etc.

It has never been easier to record your walks and climbs. Back in the day all walks were written up in the club’s log book, but, surprise surprise, things have moved on. Mike Slattery’s watch, yes watch,  gives a good impression of the approach, climb, and walk out on the day we climbed Curved Ridge. View Ranger is a great way of recording actual routes on  the OSI 1:50.000 maps that we use.  Most members will be familiar with the maps Bertie Hickey puts up on Facebook:

This is the route of Andrew Kelliher’s recce for the Level 1 walk tomorrow, Sun 11 Feb, 2017, the long awaited return to the Reeks. Interactive maps like this are taking over from the traditional route card, but two points need to be made on this.

The next step is to keep a record of the walk, not just the route.

Then fill in the details. 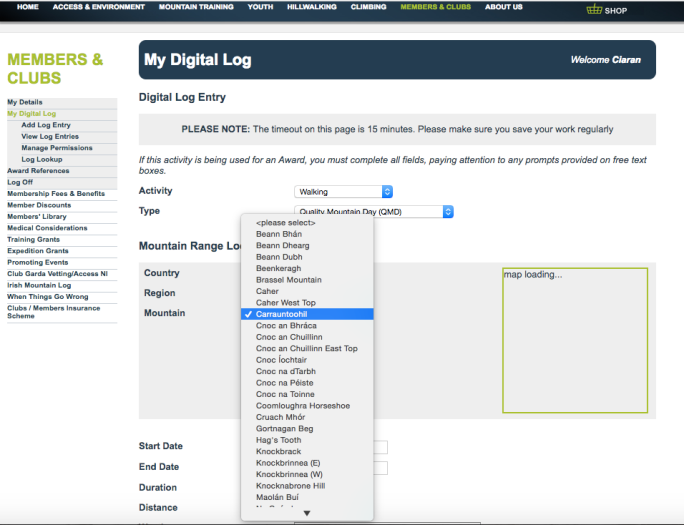 It’s as easy as that!

We recommend that you collect the information as you go, getting a weather forecast, making a route card and/or tracking your actual route,  taking photographs of conditions etc. It is handy to write up each section in Text Edit, Notepad or something similar and cut and paste the information into the online log.

I was going through Tom Finn’s (1927-2007) slide collection today and came across this photo, probably taken back west. We are not sure who the men are, let alone the nuns they seem to have rounded up. We think the men are Tom’s climbing buddies Brian Daly, Denis Switzer, and Bill Edwards. If anyone can confirm this, we would be delighted.

Tom was a founding member of the club, a pioneering mountaineer, and a keen photographer. He usually had his camera with him when he went mountaineering and illustrated details of all climbs were entered into a club logbook or a personal journal.  These provide a fascinating insight into the development of mountaineering as a sport in Kerry,  as well as the history of  Tralee Mountaineering Club.

If you have any ideas about what was going on in this photo, or a suitable caption, get in touch!

“You know the nun in the square wimple is wearing a habit like Auntie Pat’s but I don’t think it’s her. In the early days she had to stay in a convent – she used to stay at Pres but I don’t recognise any of the nuns. I think it’s definitely Denis, Bill and Brian.”

“I like the symbolism of the nuns on the mountains  on today  February 1st the feast day ‘Saint Bridget’ which traditionally marks  the beginning of spring  representing rebirth and renewal,  hope, youth and growth.”

Picking up on Mags’ point about Lá ‘Le Bríde or Bridget’s Day, just in case people think that it was a man only club “back in the day,” women were just as involved in the development of TMC from  the beginning, as this early photo of a climb on Brandon shows: